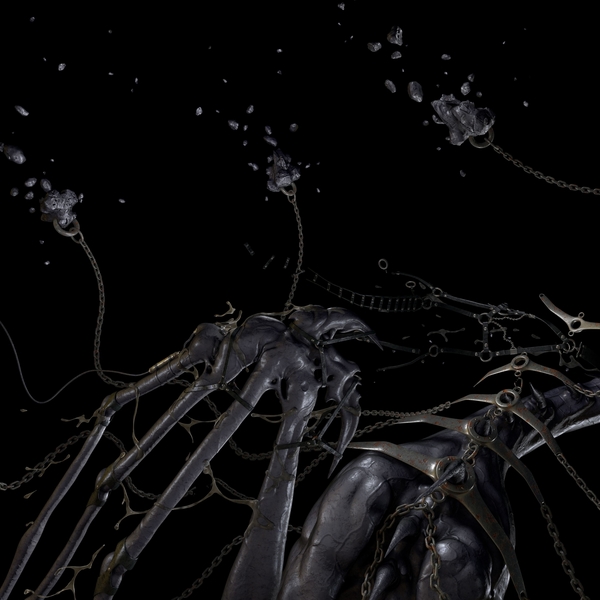 The Janus club night is over (for now), and let’s face it, despite its lasting design impression, Dan DeNorch’s and Michael Ladner’s continued promotional careers, and our own efforts to describe the scene as a coordinated, cohesive organization, Janus is really primarily about promoting the artistry of the individuals who contribute to it. M.E.S.H., KaBlam, DJ Hvad, and countless other loose associates have taken to disparate streets, finding their way onto labels, mixes, press, and Björk’s liner notes in ways that suggest restless and constantly evolving artistic identities. That restlessness is epitomized by Lotic, the member whose DAMSEL in DISTRESS distilled those shattered fragments into that archetypal “001.” Even now, at the time of writing, the Janus Berlin website solely contains his mix front-and-center, large, and streamable into infinity.

Lotic’s Heterocetera EP, his Tri Angle debut, makes a definitive step forward into clearer and more dangerous waters; never before has his work been so simultaneously direct and enigmatically warped. The work refines two of DAMSEL’s most violent cuts, while also introducing softer, more foreboding pieces — the kind of tracks that stick to your ribs, claw at your consciousness, and reveal their own beautiful, damaged qualities over time. While his compositional attention to the scarring effects that come with underrepresentation give these tracks their sharpness and severity; they also reveal a new tenderness. The portrayal of both outward sonic strength and internal emotional complexity helps balance his fascination with noise, power, and seduction. The musical result shows a pride toward his black and queer identities, demonstrating the compassion involved in subverting notions of dominant club life into forms that can be used to empower and claim ownership. And yet, even still, Lotic’s Texan background prompts him to insist that his work still is “coming from an outsider’s perspective.” Whether it be his use of staple ballroom samples or being a stranger in Berlin, Lotic proclaims an individual autonomy outside of Janus, outside of his city of residence, and outside the structures that attempt to define him.

Here, Lotic speaks about his attempts to reclaim and re-inform club culture, providing some refreshing honesty toward music-making within the club context.

NJS: I loved reading about Janus’s take on the “Hype-Hate-Copy” trinity. How do you view Heterocetera’s relationship, if any, to that concept?

Lotic: “Hate hype copy” is just kind of the natural life cycle of any trend. Every DJ has to rely on trends to some extent if they want to maintain visibility or relevance, but an exclusive reliance on trends is what I think perpetuates this cycle the most. Janus visualizing the hate-hype-copy trend cycle the way we did is our way of exposing the absurdity of it, of critiquing it outside of our productions and DJ sets. We’re anarchists! We don’t like being told what to do, and we find it generally boring and pointless to copy. This is a core belief for Janus, so of course it ends up being at the core of Heterocetera as well.

NJS: Do you feel that in club settings there’s an overt relationship taking place between listener and performer, especially with regards to a continuum between dominant or submissive? It seems like balancing the continuum is a practiced art for you — is it something you practice live and then produce and design for a recording?

Lotic: I think it’s usually more subtle. I do tend to abuse my power a bit as a DJ, but it’s coming more from a place of wanting to shake the room a bit than from pure ego. And context is still really important. There are certainly some situations where it’s more absurd to slow a track down from like 140 to 10 BPM to transition into a track that’s 90. It’s important for the listener to occasionally become the performer and vice versa. But I guess I generally feel that it’s my responsibility to play to that one person in the corner of the room who’s waiting for the DJ to DO something, to surprise them. And this informs my productions, too. I’m not writing music in a vacuum. I’m paying attention to what’s going on around me and fucking with it. I fuck with people!

NJS: Some of the harsher textures you use throughout your music seems like an intentional act to introduce noise and illegibility into otherwise calm or direct sound design. What’s your compositional relationship with noise?

Lotic: I’ve always had a love for noise music and for noisy music. Loud chanting, distortion — always gives music a bit more life for me. But at the same time, noise isn’t necessarily sexy, and seduction is equally as important to me, so each production — and DJ set too — is me trying to work out some way of having both elements present and playing nicely with one another.

NJS: Do you make rules for yourself when you go into making a piece of music? Like, not only rules to constrain your work, but also rules to help you avoid getting potentially injured in the process. Do you have any boundaries?

Lotic: I try to come a tiny bit closer to my breaking point with each new piece of music. I hadn’t really considered what the end point could be. But generally, writing music is more a kind of therapy than it is anything else. I’m hardly interested in following any rules, so it’s hard for me to create them for myself.

NJS: “The Ha Dance” sample in “Heterocetera” was a fleeting and important reference when it passed by in DAMSEL in DISTRESS. Now in the context of an EP, it’s the title track. Did you feel it was important to emphasize the relationship between your music and the history of the sample?

Lotic: I always want to remind people that I’m black and gay, and that I’m here to reclaim club music and club culture from corny straight white dudes who try to capitalize on various aspects of my identity. I’ll never stop being loud about that. Naming the EP after the track “Heterocetera” — and using that sample the way I did — is one of the more obvious ways to convey a certain identity in instrumental music, but it also felt like the most concise and effective way. I was really conscious of the fact that not everyone would “get it” if I wasn’t overt about certain things. This isn’t to say I don’t think the music speaks for itself; I think it’s clear that it’s coming from an outsider’s perspective. But yeah, I’m proud of forcing people to type “Heterocetera” any time they want to talk about this record. :)

NJS: It’s hard to describe, but there’s a very specific relationship between Heterocetera’s cover art and the music. It seems alien, like something not real — but it could also just be a normal bird. What’s it a skeleton of?

Lotic: It’s meant to be vague. It references things we’re familiar with but presents them in an unusual way, which is something I try to do with my own productions. It looks like a skeleton, but the texture is glassy. Its wings are impossibly large, it’s headless, etc. It made perfect sense to work with Alberto (Kyselina) on this, as his work often has this sort of inverted reality, this illegibility. We were really on the same page about how the art should look and feel, and we’re both super happy with the work we’ve done. We both feel that we succeeded in making the art and music inseparable, in creating a kind of universe.

NJS: The EP kind of sounds like a fetishization of “damage” — the initial violence of the first two tracks turns into some quieter, stranger, and more cerebral pieces towards the end, like something just starting to heal. I’ve heard you mention you are attracted to scars? Can you describe this? Is it an attraction to pain or an attraction to something having been given pain at some point?

Lotic: It’s an attraction to experience, I guess. There’s a story behind those scars and there’s a reason you didn’t die in the process of getting them. The strength in that survival is beautiful to me. Emotionally, we all have scars. Psychologically. I just want to write music that speaks to that.